UPE provides technical support and distribution for a world class capacitor manufacturer by the name of Electronicon. They have been building capacitors since the 1940’s. They are one of Europe’s largest suppliers of motor run, lighting, and power factor correction capacitors. Additionally, they design and build a wide range of film capacitors for AC and DC power applications including film capacitor replacements for electrolytics and capacitors for high power transmitters. 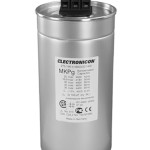 Capacitors For Lighting or Motor Run